Alexander Graham Bell is a genius, but no, he did NOT not adopt his girlfriend’s name – Margaret Hello – as a greeting for the telephone he invented!

Let us take a look at the viral hoax about Alexander Graham Bell inventing the Hello greeting, and share with you the truth!

The etymology of certain words make for great hoaxes. Everyone loves a great origin story, especially when it is inspirational or has a moral to teach. The false etymology of the honorific Sir is a great example.

So it is no surprise that people would make up stories about Alexander Graham Bell. One in particular, involved him inventing Hello as a greeting : 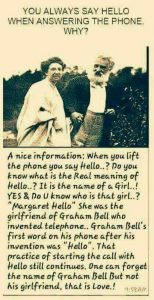 When you lift the phone you say Hello..?

Do you know what is the Real meaning of Hello..?

She was the girlfriend of Graham Bell who invented telephone..

Graham Bell’s first word on his phone after his invention was “Hello”. That practice of starting the call with Hello still continues.

One can forget the name of Graham Bell But not his girlfriend, that is Love.! 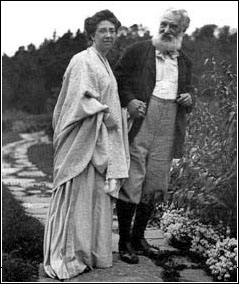 She Was Not Margaret Hello

Alexander Graham Bell’s fiance at the time he made that first telephone call was Mabel Gardiner Hubbard. When she married him the next year, she was known as Mabel Bell.

The picture used most often in these claims are of Alexander Graham Bell and Mabel Bell visiting the van Asch Deaf Education Centre in Christchurch, New Zealand in the year 1911.

There is no proof that Alexander Graham Bell had another woman, a girlfriend named Margaret Hello, while he was with Mabel Gardiner Hubbard, who was his student at that time and whom he married the next year.

What Was Spoken During The First Telephone Call?

The first telephone call was made on 10 March, 1876, by Alexander Graham Bell to his assistant, Thomas Watson. The first words he uttered were without any greeting :

Mr. Watson, come here. I want to see you.

Not only did Alexander Graham Bell not use any greeting, his preferred greeting was actually Ahoy.

Ahoy Was The First Telephone Greeting, Not Hello

The first telephone greeting was “Ahoy“, which Alexander Graham Bell proposed, because it was already commonly used on ships. Ahoy was used until Thomas Edison suggested using “Hello” instead in 1877.

But even Thomas Edison did not invent Hello as a greeting. He only suggested that it was a more efficient way to convey one’s readiness to start a conversation.

Thomas Edison Did Not Invent Hello Either

In 1877, T.B.A. David, the president of the Central District and Printing Telegraph Company in Pittsburgh, was preparing to introduce the telephone to the city. From a New York Times article on why Edison suggested it to him :

At the time, Edison envisioned the telephone as a business device only, with a permanently open line to parties at either end.

This setup raised a problem: How would anyone know that the other party wanted to speak? Edison addressed the issue as follows:

“Friend David, I don’t think we shall need a call bell as Hello! can be heard 10 to 20 feet away. What do you think?

Thomas Edison did not invent Hello as a greeting, but he popularised it as a telephone greeting.

So Who Invented Hello?

Like many words, hello has a long history. Etymologically, it is “an alteration of hallo or hollo“, which originated from :

The word “hello” was also used in publications as early as 1833 – 34 years before the first telephone call. The earliest example is probably the 1833 American book called The Sketches and Eccentricities of Col. David Crockett, of West Tennessee.

By the 1860s, it was already in common use in publications. This was many years before the first telephone call, and Thomas Edison’s suggestion to use it as a telephone greeting.

COVID-19 Vaccine : Which Should YOU Choose?