As well as acting, you like singing and song writing and released an album in the US called ‘Hell or High Water’. Is that available in other countries?

It’s not out in Europe yet. I will tweet as soon as it’s available. I’m gonna go shoot The X- Files now and after that I plan on touring a little bit and I definitely want to tour in Europe. I love performing. It’s one of the great joys in my life.

You have done a few performances live. How did they go? Were you nervous?

Oddly enough I haven’t been nervous. I don’t understand it. I think it’s probably the most potentially terrifying thing I’ve ever done so the fact that I’m not nervous at all… I don’t care to unpack it because then I might get nervous about it. I think I just really believe in the songs that I am singing and I concentrate on that and not anything else. I’m not pitch perfect and I have accepted that early on.

Whenever I sing a song it’s possible that I am going to go flat or sharp at times but I kind of let go of trying to be perfect and instead just focus on telling the story of the song. And once I started concentrating on that, I felt all the attention of my performance and how I sang fall away. When I get on stage I think, ‘this is happening in the moment, right now, tonight, it’s me and this number of people and we’re gonna go through the journey of these songs. Let’s have a good time.’

What sort of things do you find you tend to write about most?

For me, music is universal and the way it becomes universal is by being personal, which is an odd bit of sleight of hand, in a way. I don’t see my music as confessional or autobiographical but the more personal I can make it, oddly enough, the more universal it becomes. 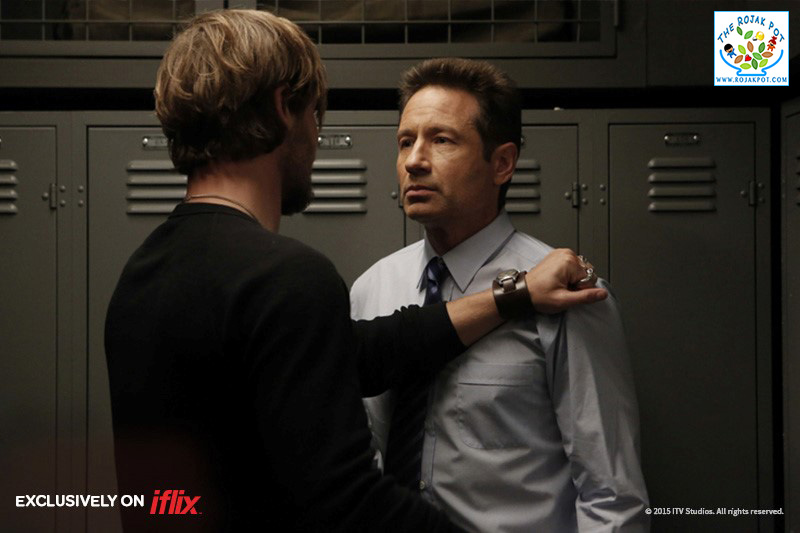 And writing lyrics for songs is a really interesting enterprise because they don’t always jump off the page at you. But when they are combined with music something magical happens. And there’s a fine line between over writing a lyric, which can fight the music, and under writing which just makes it a dumb lyric.

How would you describe the music itself?

Well I guess I’m a little loathe to describe my own music because that sounds like I am comparing myself to people who are wonderful. But I will say that it has been compared to Wilco or REM or Tom Petty. I’m not unhappy when those names are thrown around but personally, I am not saying that. I’m merely referring to what other people have said.

Has the band you play in got a name?

They like to say ‘We are David Duchovny!’ But actually, when I’m not around they call themselves Weather.

I read that Chris Carter said he would use some of your songs in the new The X-Files series.

I hope so. He said that there were a couple he thought could work. But if it doesn’t work out I would totally understand because it might be a little confusing. A little weird. But I’m just tickled that he would consider it.

Are you excited about doing a new The X-Files series after it ended in 2002?

Yes I am excited. I am just very curious as to how it’s all going to go. It’s like going to a High School reunion and having to put on a play.

I read that you cried when you started reading the first script of the new series, because it brought it all back to you.

Well, it’s because I’m a nostalgic person. But yeah. We are only doing six episodes. There are so few and there is so much that has to be done. So we are going to mix stand alones with the extension of the mythology of the show and I just hope it’s going to be great and I just look forward to giving it a shot.

There is still such a fan base for it after all these years. It’s astonishing that it has stayed there after all this time, isn’t it?

It is. I don’t know why but I’m not unhappy about it at all. It’s just one of those things that happened in my life and it made an impact and people associate a lot with it. A lot of people say – and hate it when they say it – ‘I grew up watching you.’ I love and I hate it. I think it was one of those shows that a lot of people watched with their parents. It kind of spanned generations in that way.

You are also writing books. Your first, ‘Holy Cow’, about a cow, a pig and a turkey who escape from a farm in search of a better life, was published in February and you have another one coming out next year.

Yes, it comes out in the late winter. It’s called ‘Bucky F**king Dent’, but you can’t really say that! And it takes place in 1978 during the Boston Red Sox and New York Yankees baseball rivalry. There are no animals in it and it’s what I consider to be a proper novel. It’s my attempt at writing a proper American novel.

‘Holy Cow’ was on the best sellers list of the The New York Times.

That was a total shock to me. I think, mostly because ‘Holy Cow’ is such a weird book. It’s a talking cow! I had no idea if it could find an audience. I knew it was kind of impossible to market because it’s not a kids book and yet it is a kids book. So it’s like, ‘Where does it go?’ How do you reach the audience that might be interested in that?

So I am still kinda in shock that it reached any kind of audience and I am so grateful. I have a couple of other ideas that I hope to find time to turn into real stories. It’s nice because it’s something that I can do anywhere, anytime and I don’t need anybody else to make it. It’s a real self-reliant enterprise. Just me and the words.

Writing is an early love of yours.

Yes. I would have identified myself as a writer. It was what I wanted to do when I was 17 or 18. I always thought that was what it was.

David Duchovny On Working Out

You look in good shape at the moment. Do you work out?

Yeah I have to at my age. I can’t stay in good shape without working out but it’s something that I love doing. I always have. I’ve always loved sports and playing and sweating. It helps my head and I hope that I can be around for my kids for as long as I can be. I look at it as part of my job and part of my responsibility.
Do you hit the gym or do you prefer to play sports?

Well I would prefer to plays sports but again, at my age, if I play a sport I tend to hurt myself. Little things that you didn’t even know you had, hurt. So I am leaning more heavily towards the controlled environment of the gym these days.

World of Warships Starter Pack : How To Get It FREE!

Nubarron : Get This Game FREE For A Limited Time!