Trump supporters are raging about how Democrats have been so disrespectful of President Trump since he came to office. Outright hoaxes like Trump’s photos on the floor of a Starbucks outlet have been used to drive that narrative on a weekly basis. Now they are outraged that Democrats refuse to stand during Trump’s first speech to the US Congress.

To drive that rage, they posted a photo of the top two Democrats – Steny Hoyer and Nancy Pelosi looking glum, with Democrat Senator Charles Schumer, smirking – as Trump was (apparently) giving his speech to Congress on February 28, 2017. People behind them appeared to be standing up for Trump’s speech. 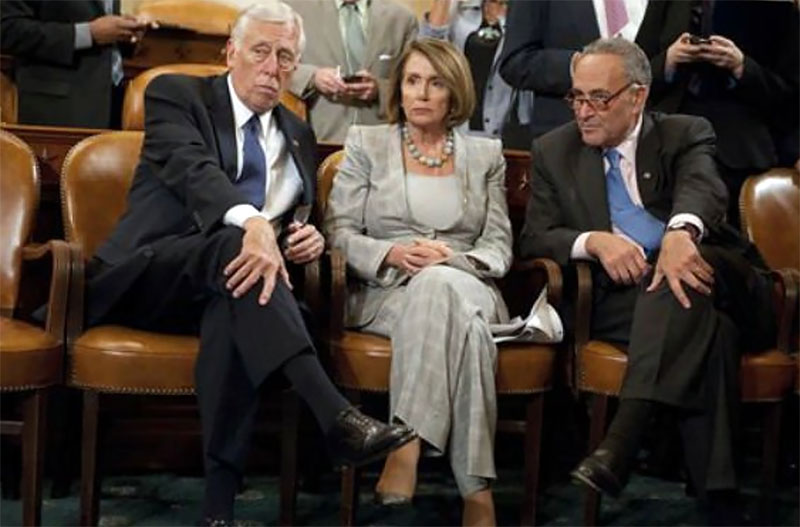 So what’s the truth? Did these 3 Democrats refuse to stand up during key portions of Trump’s speech to Congress? Let’s find out…

The Claim : Democrats Refuse To Stand During Trump’s Speech To Congress

Let’s start with a quick look at the claim. This example was written by Connor Balough of Prntly, with a corresponding post in Facebook that was shared by thousands of people. 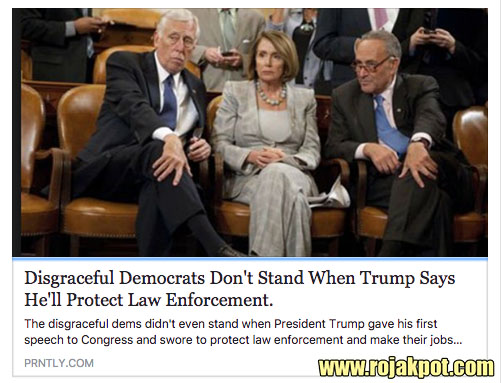 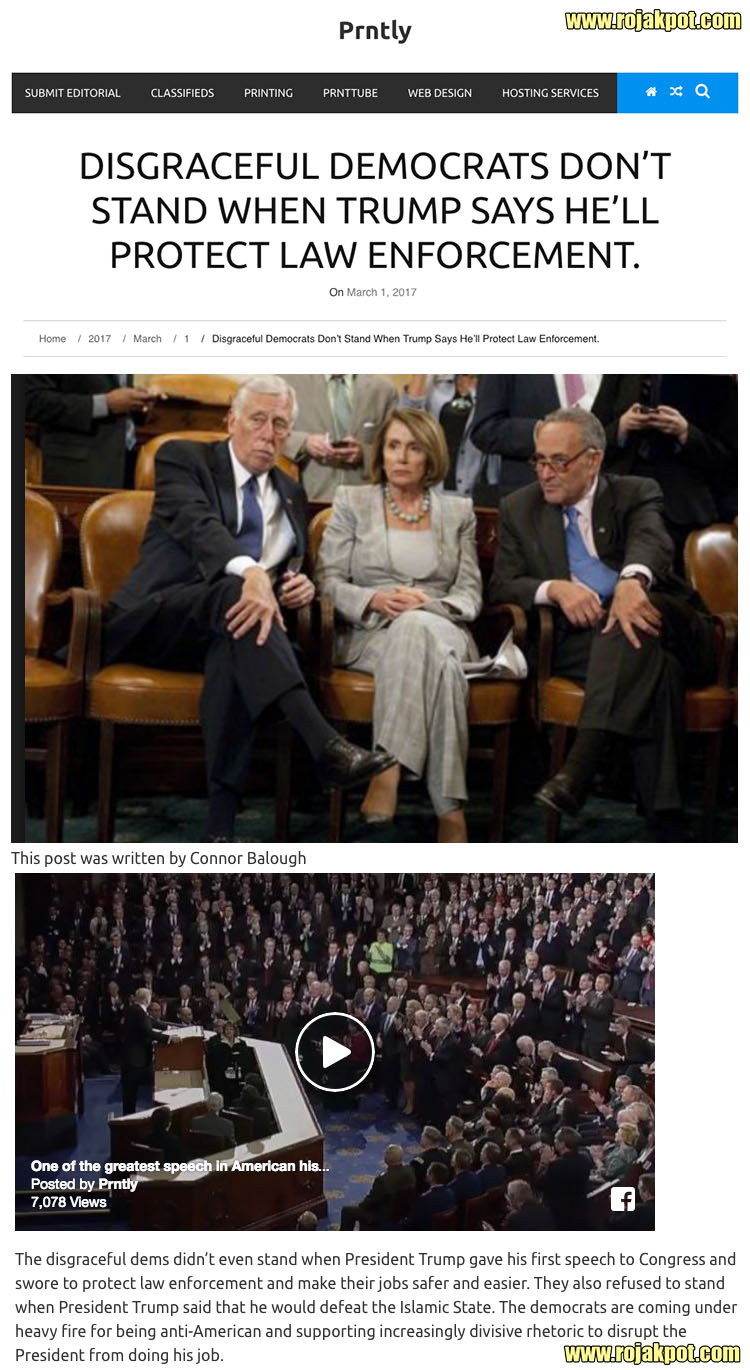 So what’s the truth? Let’s break it down for you.

The Photo Was Misappropriated

There were plenty of images from Trump’s first speech to Congress, but Connor ignored all of them. In fact, we know for a fact that he screenshot this photo at 8:01 PM on February 28, 2017, to use in his article.

He chose to use that picture of Steny Hoyer, Nancy Pelosi and Charles Schumer instead, because it would be easily misinterpreted by Trump supporters and Republicans that the three were being disrespectful (as all Democrats are… to them, anyway).

This photo had actually been used by another conservative website last year. This is a possible source for Connor’s screenshot, since the original photo has EXIF data that would have revealed the truth… 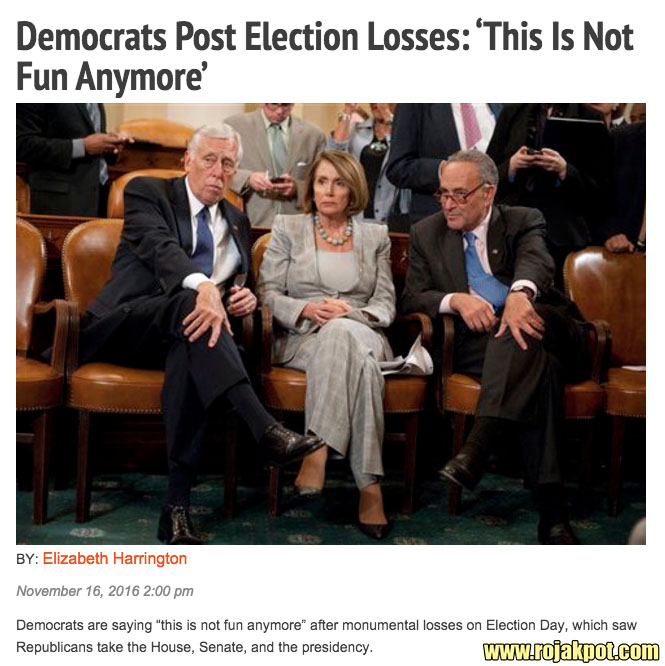 The truth is that photo has nothing to do with Trump’s speech to Congress, or any Republican for the matter. In fact, when it was taken, President Obama was still in his first term in office!

This photo is an AP photo taken on September 22, 2011 – 5.5 years ago. In that photo, House Minority Whip Steny Hoyer, House Minority Leader Nancy Pelosi and Senator Charles Schumer, were waiting to speak during a ceremony to unveil the portrait of Rep. Charlie Rangel (D-NY) in the House Ways and Means Committee hearing room in the Longworth Building.

So the photo not only had nothing to do with Donald Trump or any Republican, it did not show their disrespect for him. After all, at that time, a President Trump was as possible to them as a man giving birth!

It is clear that Connor chose the picture for its perceived impact, rather than the truth.

But Did The Democrats Refuse To Stand Up?

Actually, yes. With a few exceptions, the Democrats generally refused to stand or clap during his speech. Here are a few examples (credit : Vox) of their displeasure or disrespect (depending on your perspective) for Trump :

So yes, the Democrats refused to stand up during key parts of Trump’s speech. In fact, there are photos and videos of them looking at their phones or sitting down, while Republicans stood up and clapped.

Not exactly. There is no requirement for members of Congress to stand up and applaud the sitting President during his speech. In fact, when Barack Obama was President, most (if not all) Republicans did not stand up or applaud during key parts of his speeches to Congress. You can see that in this C-SPAN video of President Obama’s inaugural address to Congress in 2009.

They also sat down during Obama’s final State of the Union address in 2016, where House Speaker Paul Ryan sat stone-faced and refused to clap or stand up during President Obama’s speech.

It is a fact that partisanship will always result in many members of Congress refusing to stand or clap during a sitting President’s speech. If you think this is disrespectful to the President of the day, just be sure to apply the same standard when the sitting President is not one that you support.

If the conduct of these Democrats are truly so disgraceful (as Connor puts it), is there a need to share a “fake” photo? If you need to embellish the truth, then your truth really isn’t all that powerful, is it?