I had a weird dream last night, and believe it or not – this is how I knew Donald Trump never actually wanted to buy Greenland from Denmark…

I Had A Weird Dream About Trump

This morning, I woke up with a WTF, Eureka, bombshell realisation that Donald Trump never actually wanted to buy Greenland. But first, my weird-ass dream…

My mother invited Donald Trump for dinner (I told you – weird!)

Trump accepted, and my mother invited her friends and called in the best caterer in town for the big event.

Then just before the big party, Trump called me up saying that he had a business proposition.

He asked to purchase my wife, saying that he’s doing it as a favour to me.

When I laughed, saying that he must be joking, he huffed and puffed and told my mother he wasn’t coming.

My mother told me not to worry. She invited Barack Obama for next week, because frankly… no one RSVPed for Trump’s dinner!

Donald Trump’s sudden interest in Greenland was so weird that no one seriously thought he was serious. Seriously.

And who would have expected him to cancel a STATE VISIT to Denmark over his ridiculous demand to buy Greenland from the Danes? 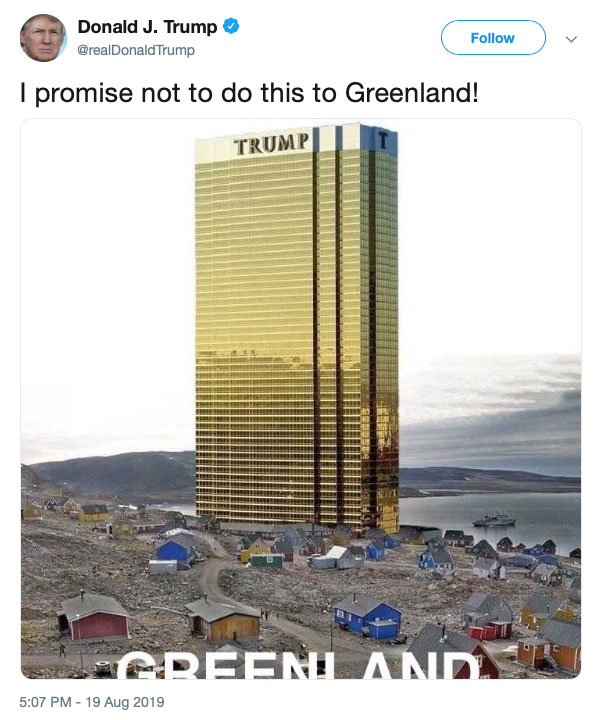 So what’s really going on?

The fact is – Donald Trump does NOT really want to buy Greenland. He just wants a pretext to cancel his state visit to Denmark.

On 31 July 2019, the White House announced the state visit to Denmark from 2- 3 September, right after the 80th anniversary of World War II in Poland.

This was going to be only the fourth state visit by a US President to a major US ally, and on the personal invitation of Queen Margrethe II. So this is a big deal.

This is a BIG PROBLEM for Trump, because he HATES being compared to Barack Obama… and Obama is highly popular overseas.

In fact, he commands much more respect than Donald Trump, who has often been compared to a baby with a temper tantrum.

While Donald Trump’s international visits have been beset by protests and public displays of disrespect, Barack Obama has been greeted by adoring crowds.

THAT, ladies and gentlemen, is what Trump is most afraid of. A direct contrast between the potential unpopularity of his state visit, with the popularity of a small business-only talk by the former President.

For that, Donald Trump was willing to throw longstanding US foreign policy under the bus, and Danish (and Greenlandic) goodwill together with it.

But look on the bright side… the Danes will not have to put up with the insecure, petulant little Trump, and Greenlanders can rest easy they won’t have to be associated with the likes of Trump anytime soon!