Empire City Damansara is a large commercial development project located along the LDP, near the Kepong toll. Occupying a land area of 23 acres, it would massively increase the number of offices, serviced apartments, hotel rooms and shopping mall space in the area.

Its developer, Mammoth Empire Holdings Sdn. Bhd., who also built the Empire Shopping Gallery in Subang Jaya, originally planned to complete the project at the end of 2014.

By the middle of 2013, they were about 60% complete, but development slowed significantly and the completion date was postponed to the end of 2015. 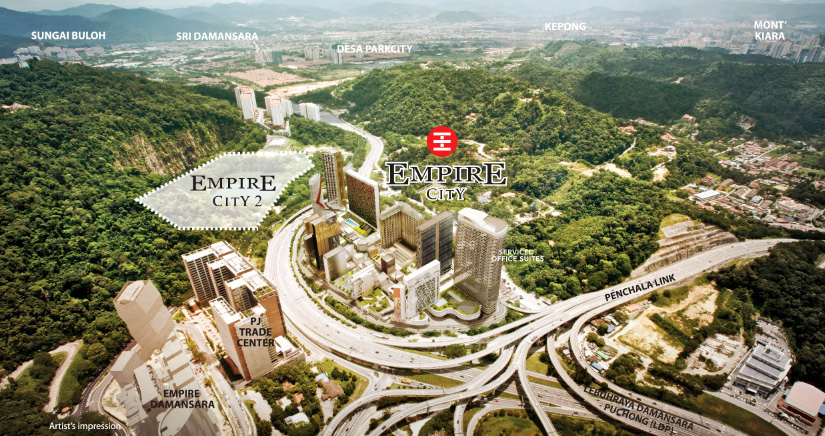 By November 2015, the end was still not in sight, but that didn’t stop them from hosting what they dubbed was the “Party of the Century“, with Paris Hilton and K-pop group 2 AM entertaining those lucky enough to be invited. However, the actual opening of Empire City Mall was further delayed to September 2016.

On 13 March 2016, 林家聲 (Lim Kar Sing) posted a bunch of photos that were purportedly taken on the 12 March 2016, when he followed a friend to inspect his unit that was apparently ready for occupancy. Take a look at what he posted :

Yesterday I was drop by Block E, Empire City @ Damansara with my friend.

The developer keep on asking them settle the maintenance fees in order to handover the VP (vacant possession). As per photo, this is what you see.

In this situations, I have some queries:

1- How come ‪#‎EdaArchitect‬ can issue a architect cert saying this is already completed?

2- How come the developer ‪#‎MammothEmpire‬ dare to issue a notice of vacant possessions?

3- I know all bank will answer (in fact, MBB already revert with this STANDARD ANSWER): “Base on our undertaking letter when approved the EF, our drawdown is base on Architect Cert”

Come on, last time when I still with MBB, always kena force to perform site visit on the property (although just a RM 300k property) and business premises. Bank’s EF easily reach RM 500M on this project, does the bank are not required to do a site visit? ‪#‎Maybank‬ ‪#‎UOB‬ ‪#‎AmBank‬ ‪#‎PublicBank‬

4- VP without handover a key still consider VP ? of cause there are no keys, due to the door haven’t fixed as well.

5- Upon VP, my friend need to start paying the installment, should him ?

6- Block A was VP mid of last year, till now also haven’t handover the key, I strongly believe the banks already received a lot of complaint, the question is: WHY STILL CONTINUE DRAWDOWN???

His post was shared over 3,600 times, triggering the scandal.

There have been many complaints about this development, but no one has posted so many startling photos of the units that were ostensibly completed, according to the architect and developer.