On the 15th of March, 2016, 林家聲 (Lim Kar Sing) reported that he received a Letter of Demand (LOD) from Mammoth Empire Holdings’ lawyer, demanding that he remove all his Facebook posts on the issue. Take a look :

Basically, they are alleging that he posted pictures of the Marriott Hotel floor, not his friend’s actual office suite; and that he took those photos illegally because he was not authorised to enter the premises.

Interestingly, the first email shows that Mammoth Empire Holdings admitted that the actual unit is not ready for viewing and inspection of defects.

They covered it up by claiming to be upgrading the unit for free, but what exactly are they upgrading that requires an additional 4 months of work?

This was his response :

2,3,4: If developer FORBIDS me FROM GOING in, I’m wonderING why the appointment email is only senT to me, and also collect money from me… I thoughT u guys wERE giving me authority to go with my Fren…. Please check your staff email, they only SENT email to me wo… And askED me proceed to THE site office tomorrow…

5 & 6, I’m sure I WAS at 18th floor, but all unitS HAD no door cover, is that considerED AS unauthorised access ?

Personally, the only valid contention in Mammoth Empire Holding’s LOD) was that 林家聲 (Lim Kar Sing) posted photos of the “wrong floor”.

If that is true, Mammoth Empire Holdings can quickly squash this brewing scandal by quickly posting photos of the actual 18th floor of Block E.

However, if Mammoth Empire Holdings actually brought 林家聲 (Lim Kar Sing) and his friend to view the “mock up unit” at the 14th floor of Block E, which is purportedly owned by the Marriott Hotel, then we can only wonder just how “complete” the actual units are…

On the 17th of March, 2016, 林家聲 (Lim Kar Sing) received a letter of demand (LOD) from EDA Architects’ lawyer, Sidek Teoh Wong & Dennis, demanding that he cease and desist from further posting on this issue. 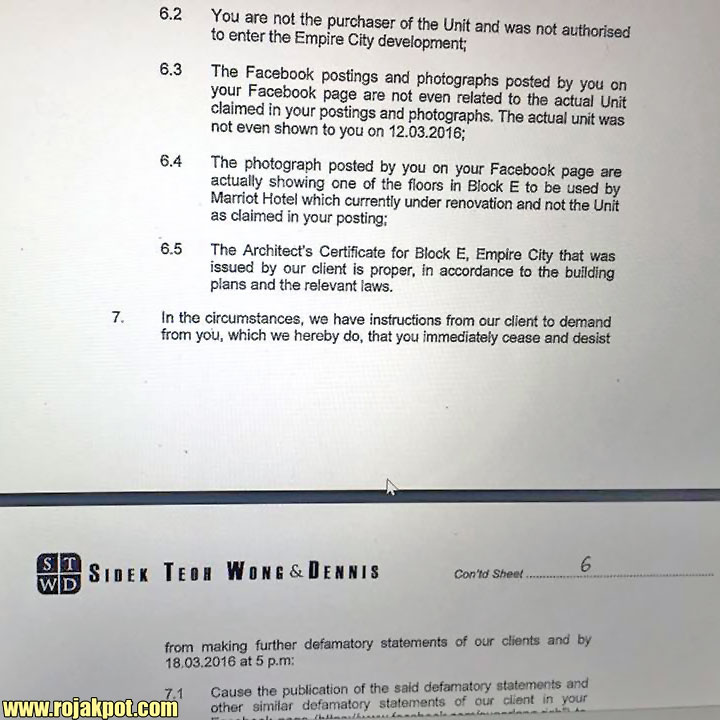 IMHO, they are probably correct that 林家聲 (Lim Kar Sing) were not shown the actual 18th floor unit that his friend owned.

After all, the “inspection invitation” email from the developer said that they would be shown a “mock up unit”. Why they would show the Marriott Hotel’s units as the “mock up unit” though is baffling.

Of course, this doesn’t mean he didn’t go by himself to the 18th floor to check (and take photos of) the actual unit on the 18th floor. We have attempted to contact 林家聲 (Lim Kar Sing), but he has not responded.

Next Page > They Forced A Site Visit, Another Owner’s Photos

You Can Now Register For Vaccination Online / By Phone!