There are many Muslim apologists who claim that ISIS is not Islamic because they didn’t even have the Quran. They even quoted a former ISIS hostage and journalist, Didier François, as evidence!

We will debunk their false claims, and show you what really happened!

The ISIS Did Not Even Have The Quran Hoax

When ISIS (Islamic State of Iraq and the Levant) started beheading captives and destroying historical monuments, people all over the world were appalled by their barbarity. Muslims were especially dismayed, as such acts by their brethren reflected poorly on them, and their religion.

Some spoke out stridently against the inhumanity of ISIS, while others chose to keep quiet, lest they draw unnecessary attention to themselves. A select few, though, became apologists whose mission it was to dispel any notion that ISIS was Islamic in any way.

Here is one of their latest efforts – a claim that ISIS is not Islamic because former ISIS hostage, Didier François, said that “They didn’t even have the Quran.” Take a look : 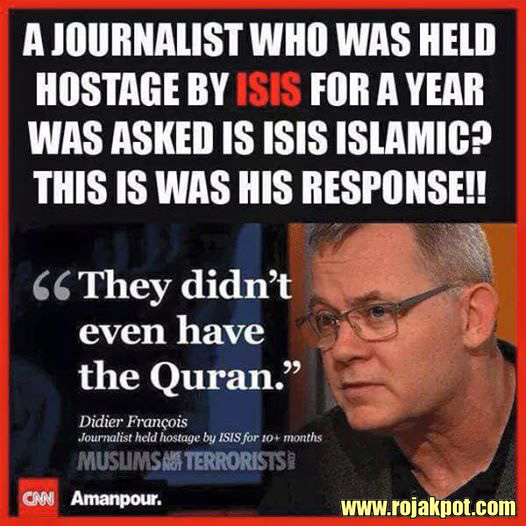 Didier François was claimed to have said that ISIS didn’t even have the Quran in response to the question of whether ISIS was Islamic. That’s why it’s being shared as “evidence” that ISIS isn’t Islamic, hinting that it was formed by those who wish to make Islam look bad.

That’s quite a startling claim, isn’t it? How can an organisation that bases its authority and laws on Islam not even have the Quran? How plausible is that? Let’s find out what the truth is.

Didier François was one of the four French journalists released in April 2014, after being held hostage by ISIS for 10 months. So that puts paid to the first point :

Claim #1 : Didier François was held hostage by ISIS for a year.

Verdict : False. He was held hostage for 10 months.

On the 3rd of February 2015, CNN’s Christiane Amanpour interviewed Didier François about his experience as an ISIS hostage. You can view the 13+ minute video here.

At around 10:45, Christiane asked Didier if any of the British or French jihadists ever talked “about their background, about why they were there“. Didier replied.

They didn’t even have the Quran; they didn’t want even to give us a Quran.“

After that interview came out, Didier François clarified that he did not mean to suggest that the ISIS jihadists did not have copies of the Quran. In his clarified remarks to Slate.fr, as translated from French :

As Didier himself pointed out at 10:55 of the interview, his English “was not that good”. What he really meant was his ISIS captors refused to lend the hostages anything, not even the Quran.

Verdict : False. Christiane asked him if the British or French jihadists ever talked “about their background, about why they were there”.

Claim #3 : Didier François said, “They didn’t even have the Quran”.

Verdict :True, but taken out of context. Didier did say, “They didn’t even have the Quran” but he meant that his ISIS captors refused to lend them the Quran, not that they didn’t have the Quran at all.

So there you go – all three claims are false. Yes, even the third point was false, because it was a comment that was intentionally taken out of context.

Muslims Do Not Need To Be Ashamed Of ISIS

Muslims need to speak out against ISIS barbarity, but they do not need to be ashamed of what ISIS has done.

They didn’t commit murder unarmed men and women. ISIS did.

They didn’t hang or behead civilians. ISIS did.

Of course, not. So why should all Muslims be blamed for the crimes (as heinous as they may be) of their fellow Muslims?

Muslim Apologists Should Be Ashamed Of Lying

That said, Muslim apologists must accept the FACT that ISIS is Islamic.

It is an organisation that is based on Islamic principles and laws. Sure, one may argue that it is merely their interpretation, but that doesn’t negate the Islamic origin and purpose of ISIS.

ISIS was established by Muslims to form a Caliphate, period.

You cannot and should not lie about ISIS being established by the Israelis, the Mossad, the Americans, the British, the green lizard aliens or Kim Kardashian, just so you won’t feel guilty or embarrassed.

As I pointed out above, other Muslims do not have to feel ashamed about ISIS being an Islamic organisation. However, it is wrong and actually immoral for Muslim apologists to tell lies to cover up this inconvenient fact. This poster was originally posted by the Revert To Islam Facebook group, which is an Islamic evangelism group. There is nothing wrong in evangelising their religion, but I would like to point out lying is a SIN in Islam.

In fact, it is considered the most wicked of crimes. Here are selected quotes from the Quran on lying and making false accusations :

“Indeed Allah does not guide one who is a transgressor and a liar.” [Quran 40:28]

“Do not mix the truth with falsehood or conceal the truth while you know [it].” [Quran 2:42]

Islamic apologist groups like Revert To Islam would do well to remember them.