After the public outrage over Limkokwing University’s King of Africa billboard, the university announced that they removed it days ago.

However, the incident has apparently triggered an outpouring of revelations from former students and employees of Limkokwing University. After public condemnation of their King of Africa billboard, Limkokwing University quickly removed it. In their Facebook post on 10 June 2020, they claimed that it was taken down on 5 June 2020.

We agree that the board was a misstep and we have removed it on the 5th of June 2020. We were wrong and for that we would like to formally extend our heartfelt and sincerest apologies to our beloved students, employees, and the community. We are sorry. In a BFM interview with the Limkokwing University Manager of the Arts Department, Lum Weng Wah, he claimed it was his birthday gift to the university founder.

At that time, it started as a 6-feet poster. But it was expanded into a banner that was put up on or before 23 January 2020, according to a video posted by Malaz El, and left up until 5 June 2020.

Do check out the BFM interview, and listen to a friend of ours – Emmanuel Olalere, who shared with me several times how he was a victim of racism right here in friendly Malaysia. 🙁

After listening to the BFM interview, Naima Ablaal, a former Limkokwing employee, posted this video rebuttal:

I just listened this interview @BFMradio and @malazdotcom said it alot but this is quick facts that i know if you listen the interview.@limkokwing you should be shamed Mr Lum do interview for something he had no idea the backlash bcuz i know you approved that billboard🤷🏽‍♀️ https://t.co/SK7aIqAZ8B pic.twitter.com/1sVBexLe1P

For some context, she was apparently fired after speaking up against racism in this chat :

The Limkokwing Billboard Opened A Can Of Worms

Despite its removal, the Limkokwing King of Africa billboard had already triggered claims of racism by former students and employees of Limkokwing University.

Seen as people’s attention is on Limkokwing, I was thinking about sharing my own personal racism experience with the institution. They were professional racists..

My first experience was when the Sound and Music department wanted to open a fashion show with a massive choir. They called for students to volunteer as they needed 60 choir members. Me and my friend (from Namibia) volunteered but soon after we were told we didn’t make the cut.

A friend of mine (from Brunei) who did make the cut went to the first rehearsal. There they announced that they still needed volunteers. My friend raised her hand and said ‘wait, Malaz and (Friend) volunteered and you said there was no more room. How come?

“Is it because they’re black” the choir conductor said ‘yes, they’re a but too roasted’ My friend then pointed out that they were being racist and dropped out of the choir. She was my flatmate and came home and told me what happened.

There I am, being denied an opportunity because of the colour of my skin. You can’t imagine how that feels. I stopped taking part in any school activities after that. I complained and they said that the matter was taken care of. Obviously there was nothing I could do about it..

About a year and a half after that incident I started working for the university again. I was doing radio ads, planning events, going exhibitions, and promoting the school. By the time I graduated I was offered a fulltime job. It wasn’t all bad but..

On of my colleagues was assigned a photoshoot. Her brief was ‘International and diverse’ we were branding as the most international university, so we had to reflect that in the print. The shoot was to be done during winter break when most students were back home.

So naturally, she reached out to staff and the few students who were willing to come to campus during the holidays. We were so excited as we heard that the photos were going to be plastered all over Malaysia imagine that

The pictures turned out so beautiful. They really represented the university well. So diverse with lots of smiles.

There just weren’t enough students willing to come to campus and they wanted a specific amount of people so some of us (staff) jumped in. Boss didn’t like it and this is her response to Manager 1

My heart sank when I saw this. I couldn’t believe my eyes. Am I not human? Why would anyone say this? Am I not worthy?

We were all upset about the instructions. Including the Managers, one of which is black. But it is what it is and we kept it moving. We did a reshoot but there were new instructions not to repeat people from the last shoot. Well, like I said, it was the holidays..

You see, there’s multiple layers to this type of racism, Dato. 1. You’re continuing to perpetuate the stereotype that Black and dark skinned people are uneducated. 2. You removed us from the picture based on the colour of our skin. And you followed it up with this.

I was so angry! My black colleagues were so angry. How could they do that to us after all that we had done for that place? We all dealt with our anger in different ways and we got loads of support from our non-black colleagues. I resigned the next day and left Malaysia soon after

This was the result of the re-shoot I mentioned earlier on. The one where they wanted no Africans because Bangsar has no Africans Face with rolling eyes 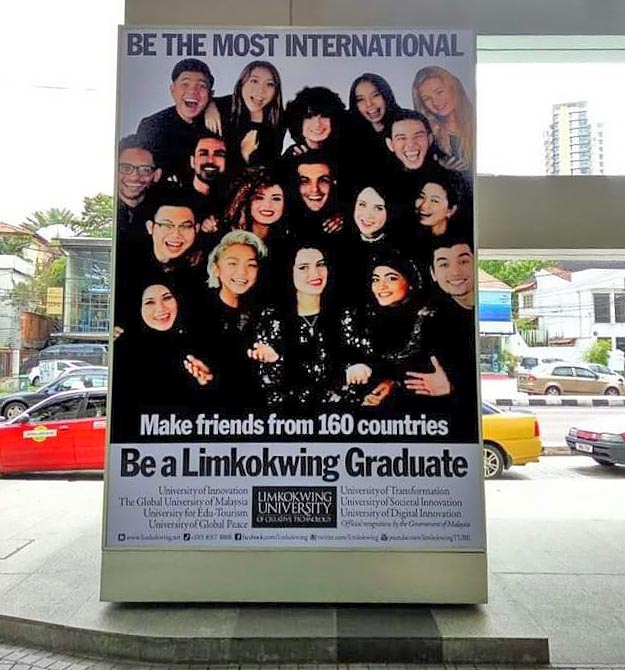 I would like to add that these beautiful people in these pictures had no idea what was going on. Only people in my office knew the full story

Limkokwing university is funded by a number of African nations. That’s why there are many African students in Limkokwing. They have also been funded to open campuses in a few countries but they have all failed due to terrible leadership. When I say toxic environment, I mean TOXIC

This is why it angers me when he presents himself as a saviour to the African people. He has not done anything for the African nations he was funded by, except continuing to perpetuate a negative stereotype of Africans not having access to education.

Here are a selection of messages sent to Malaz EL, who was a former employee of Limkokwing University.